The Story So Far

The simplest attribute on which one could imagine differentiating candidate hash functions is the number of collision produced when hashing a fixed pool of keys. By that standard, my last post identified Murmur3, Jenkins, City, Spooky, FNV1/1a, SDBM, AP, and RS as possible contenders. Today we’re going to see how they compare  to each other on some more rigorous tests.

A hash function ought to distribute its keys uniformly across its output range. To see how these functions stack up, we’ll put our 42 million unique keys through each hash function, bin the output, and compare the bin counts with expectation:

For bins of equal size, E[bini] = Number of items hashed/Number of bins

Now, uniformity is different from random uniformity. In general the latter is not always necessary for building a good hash table, but the analysis of some schemes assume it. For our purposes, we’re going to want our hashes to look like they are drawn from a random uniform distribution — simple uniformity won’t cut it for our applications. This means that when we look at our bin counts, we want them to be neither too smooth nor too lumpy. To quantify this concept, we’ll use a chi-squared test.

Here I’ve cut the whole 64 bit output space into 100 bins, and again in 1,000,000 bins. For a final test I modded out the bottom 20 bits, to check their distributions in isolation.

Jenkins passes all three of these nicely. City and Murmur each come up “almost suspect” once, and Spooky shows some suspicious behavior in the 100 bin test. I put the heaviest weight on the bottom 20 bit test, and can pretty comfortably give these four functions a pass here. AP does dramatically better at higher bin counts, which is interesting. We can pretty solidly eliminate RS, SDBM, AP, and both FNV variants based on this analysis alone.

As a final note, hash functions are not meant to be RNGs! This test holds them to a very rigid standard that is not generally necessary to build a good hash table. It’s just that in our specific application, we’re going to want our hash values to be somewhat random looking.

Before I continue, let me explain a little bit more of the structure of the data I am working with. I have 251 namespaces, each of which has a variable number of 192 and 256 bit keys associated with it. All told I have in the neighborhood of 66 million datapoints of the form (namespace, key). Only the key portion of these tuples actually gets hashed, however. Up until this point, we have been ignoring the namespace attribute of these data points, and thus have been restricted to looking at the 42 million unique (key, hash(key)) pairs. Let’s see if we can exploit larger set of data by including the namespaces!

In the chi-squared analysis above, we did our binning over the union of all namespaces. Now let’s individually bin the hash values of each namespace. All said and done, we have 251 namespaces ranging in size from a tiny handful to several million elements. This gives us 251 vectors of size 100, with

V{n,i} = Number of items of namespace n hashed to the i-th bin

For each namespace, we can compute the mean and variance of its count vector. I’ll leave it as an exercise to the reader, but it’s a pretty simple calculation to show that if you sample from a random uniform distribution, the variance of such a bin-count vector should equal its mean. If the variance is lower than the mean, it implies that the distribution is flatter than expected. On the contrary, if the variance is higher, it implies the existence of hot-spots on the range that are getting more than their fair share of data points hashed there.

Enough with the words, let’s look at the graphs! To generate these, I took the subset of namespaces that had at least 100,000 elements, of which there are 83. Each point is a namespace, and the green line shows the theoretical variance = mean relationship we’d expect from binning a random uniform distribution. Finally, I ran a Bonferroni corrected chi-squared test within each namespace. Those that come out “almost suspect” or worse are highlighted in red. 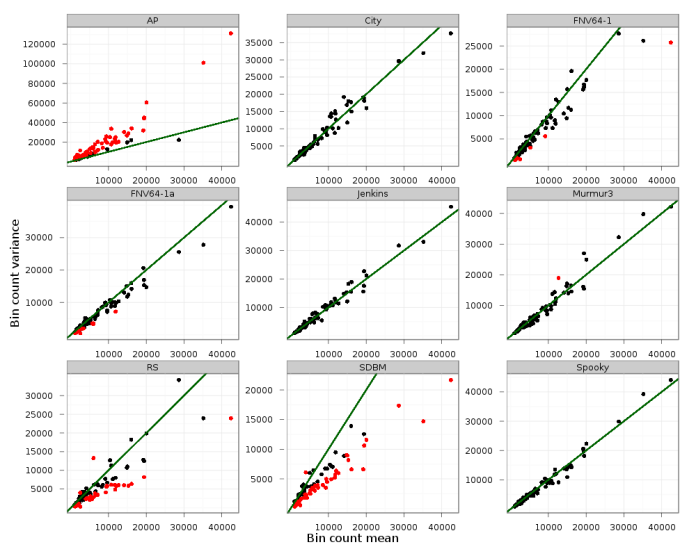 You can think of these namespaces as small experiments. Together, they help give us a picture of what the chi-squared test done on the whole dataset tells us.

So far we’ve been taking our input sets as a given, and examining the statistical properties of the outputs. While powerful, we need not limit ourselves to these techniques. Onward to avalanche!

A common test of hash function performance is whether or not it achieves “avalanche.” This refers to the desireable characteristic that

Basically, if we keep all of the input bits the same, save for exactly 1 which we flip, we’d hope that each of our hash function’s output bits changes with probability 1/2.

I generated the following avalanche diagrams by using a random sample of 4000 keys (2000 of each type). The x-axis is the input key bit, the y axis is the output hash bit, and the color of the (x,y) tile is a measure of the bias that I/O pair has. Black indicates the desired 50% flip-probability, bright green indicates that the output bit is “stuck” and, certeris paribus, it doesn’t ever vary as a result of flipping just that input bit. 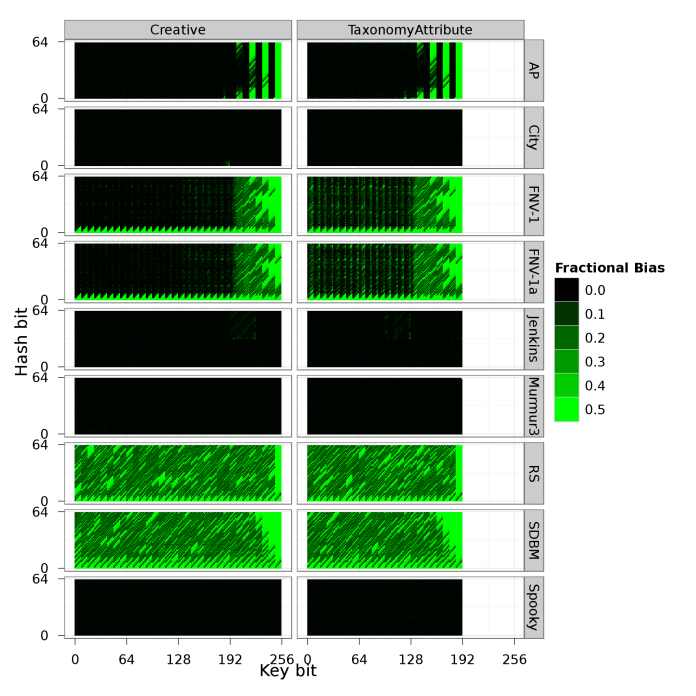 This test absolutely wrecks AP, SDBM, both FNV twins, and RS. Jenkins has some poor mixing in its upper bits, but that is mentioned in the implementation. It’s very small, but a slight bias can be observed in City’s lowest bits on the Creative keys. Murmur3 and Spooky are the only two functions left unscathed by this test. Given some of our algorithmic needs, this is a very slight knock against both Jenkins and City.

After all of this, Murmur3, Jenkins, City, and Spooky are the only functions that I’m really pleased with for our work. I’ll give a slight edge to Murmur3 and City over Jenkins due to the avalanche results, and City’s incredible speed. Spooky’s performance here is notable, but I’m a little uneasy putting it forward as a candidate for use in production, as it is still in beta. I’ll be keeping my eye on it. Based on these results it shows a lot of promise!

The next logical step is to plug some of these in to Timon’s work, and see how they serve as the keystone of our hash table!