In my previous set of posts, I tested Apache Spark for big data analysis and used Wikipedia page statistics as a data source. I’ve used the same data as in the Apache Spark blog post: Wikipedia Page Counts. This allows me to compare ClickHouse’s performance to Spark’s.

I’ve spent some time testing ClickHouse for relatively large volumes of data (1.2Tb uncompressed). Here is a list of ClickHouse advantages and disadvantages that I saw:

Group by: in-memory vs. on-disk

Running out of memory is one of the potential problems you may encounter when working with large datasets in ClickHouse:

By default, ClickHouse limits the amount of memory for group by (it uses a hash table for group by). This is easily fixed – if you have free memory, increase this parameter:

If you don’t have that much memory available, ClickHouse can “spill” data to disk by setting this:

(The reason for this is that the aggregation is performed in two phases: (1) reading and building an intermediate data, and (2) merging the intermediate data. The spill to disk can only happen during the first phase. If there won’t be spill, ClickHouse might need the same amount of RAM for stage 1 and 2.) 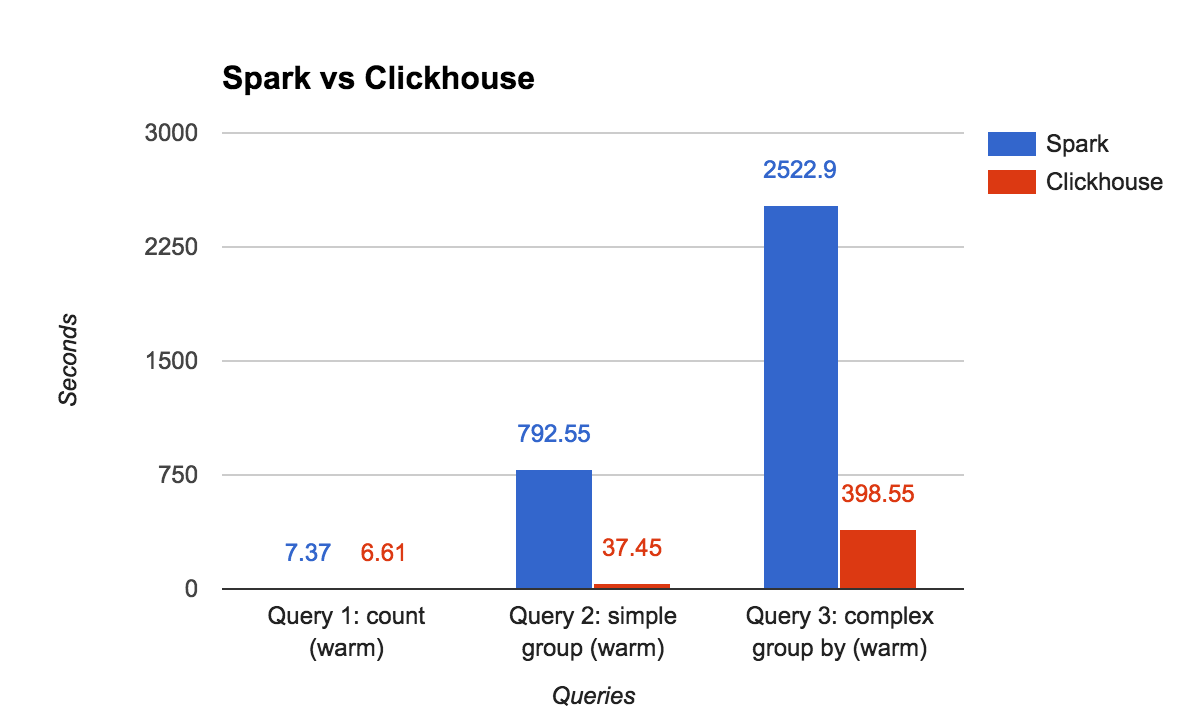 I wanted to see how ClickHouse compared to MySQL. Obviously, we can’t compare some workloads. For example:

Potentially, you can use ClickHouse for real-time queries. It does not support secondary indexes, however. This means it will probably scan lots of rows, but it can do it very quickly.

To do this test, I’m using the data from the Percona Monitoring and Management system. The table I’m using has 150 columns, so it is good for column storage. The size in MySQL is ~250G:

Scanning the whole table is significantly faster in ClickHouse. Retrieving just ten rows by key is faster in MySQL (especially from memory).

But what if we only need to scan limited amount of rows and do a group by? In this case, ClickHouse may be faster. Here is the example (real query used to create sparklines):

It is relatively fast.

ClickHouse (some functions are different, so we will have to rewrite the query):

As we can see, even though ClickHouse scans more rows (270K vs. 11K – over 20x more) it is faster to execute the ClickHouse query (0.10 seconds in MySQL compared to 0.01 second in ClickHouse). The column store format helps a lot here, as MySQL has to read all 150 columns (stored inside InnoDB pages) and ClickHouse only needs to read seven columns.

Wikipedia trending article of the month

Inspired by the article about finding trending topics using Google Books n-grams data, I decided to implement the same algorithm on top of the Wikipedia page visit statistics data. My goal here is to find the “article trending this month,” which has significantly more visits this month compared to the previous month. As I was implementing the algorithm, I came across another ClickHouse limitation: join syntax is limited. In ClickHouse, you can only do join with the “using” keyword. This means that the fields you’re joining need to have the same name. If the field name is different, we have to use a subquery.

Below is an example.

First, create a temporary table to aggregate the visits per month per page:

Their response time is really good, considering the amount of data it needed to scan (the first query scanned 2.57 TB of data).

The ClickHouse column-oriented database looks promising for data analytics, as we